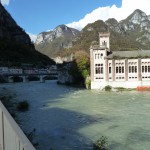 The area on and around Monte Grappa has been severely battered during W.W.I. till up to one of the final battles. We will be cycling along the routes made by the soldiers fighting on both fronts trying to win over each other. Riding around the foothills of Monte Grappa the heart of the fighting you will see more mountains the so called Pre-Alps, and will also spot the first line of the Dolomites which were awarded the World’s Heritage by Unesco.

Crossing the river over an ancient bridge we will be cycling along a canyon with a river flowing down nice waterfalls on one side and the rocks on the other, really a pictoresque route. 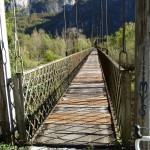 wood and metal bridge over the Brenta’s river

At the top a small village and a lake collecting the water of the melting snow from the dolomites which we will spot further ahead. Your eyes will be wide open catching the overwhelming majesty of the first line of Dolomites spiking high towards the sky. 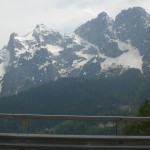 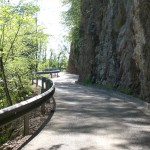 We will be riding very close to them, and have a break just to admire them, before heading back to Possagno for a nice dinner.

Pleae check out the photo gallery for more images